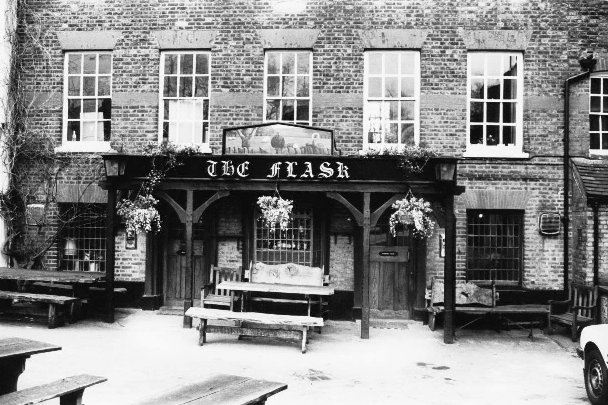 Click and drag to explore the Flask for yourself, thanks to the ingenuity of Glyn, the Flask’s manager. Glyn is dubious about the pub still being haunted, but he pulls a good pint and runs an excellent pub!

This bright, clean and cheerful coaching house, which dates from at least the 17th century, virtually backs onto Highgate Cemetery. Built into the rolling hills which surround Highgate and by which the village is reached, its ancient and sensitively restored architecture make it one of village’s untouched gems. Indeed, if one ignores the modern pumps on the bar one could imagine the year to be 1713, not 2013. Partially subterranean, at least one of its many nooks and snugs was in the past used for autopsies, and retains a damp coolness today.

A bullet hole in the wall, gravestones in the garden and an alleged maze of tunnels all hint at the Flask’s mysterious past.

In his book, ‘Beyond The Highgate Vampire’, David Farrant details much of the psychical activity which this old inn has been host to over the centuries.

These include recurrent spates of poltergeist activity, such as light bulbs blowing at the same time as bottles of lager flew from shelves, two independent clocks stopping simultaneously, and a wreath of flowers hurling itself across the bar.

The two best known ghosts said to haunt the Flask are that of a Spanish barmaid who is supposed to have hung herself in the cellar after being rejected by her lover, and the ghost of a cavalier who is still seen disappearing through a pillar today, replete with feathered hat and cape. But one of the less well known ‘ghosts’ is that of a tall, darkly clad figure, resembling a monk, who was for many years seen sitting on an old wooden bench observing the pubs visitors with a penetrating stare, only to disappear promptly if approached. The sightings were so frequent in the late 1960s that the bench (now removed) became known as the Old Monk’s Bench.

Ian Topham, creator of the website Mysterious Britain and Ireland, has carried out field research in Highgate, and kindly provides some further background on the Flask’s history in the following article first published on his site:

During the 18th century the manor courts were often held at the Flask and it first appeared on court rolls in 1716, the Flask Tavern probably dates back as 1663 when the land on which it stands was owned by William Royles. There were traditions to be adhered to concerning the Manor Court and on 22nd April 1740 when the court met at the Assembly House in Kentish Town the jury fined Nicholas Jefferies, the licensee £5 “for not allowing this jury sufficient wine according to the ancient and laudable custom.”
In 1682, following Royles death, his widow and sons sold the land, which would have included the Flask to a vintner named William Blake. From Blake it passed to Susanna Carpenter of Abbots Langley in 1683 and then to James Hooper of the Middle Temple in 1684. A spinster, Mary Blake took possession in 1685 and then sold it on to John Brooke esquire in the same year. When John Brooke died in 1689, it passed to his sons who then sold it in 1692 to Miss Mary Hooper. The Flask passed to her sisters Mrs Phillipa Martyn and Mrs Amy Nutley who eventually sold the tavern and its associated bowling green in 1716 to Edmund Rolfe of Thavies Inn. Upon Edmunds death, his daughter Mrs Elizabeth Phillips received the pub and in 1737, her four daughters in turn sold it to Charles Lacey of Colney Hatch Lane, Hornsey. Charles Lacey died ten years later in 1747 and his will bequeathed the Flask to his grandson, also called Charles Lacey. Charles and his wife Elizabeth sold the Flask in 1762 to a brewer from Shoreditch called William Carpenter who ran the pub for twenty years and following his death, his wife continued, until in 1807 it passed to their granddaughter, a widow named Maria Fowle from Mitcham who married Rev. Thomas Aubrey Grantham shortly afterwards. In 1812 the Flask Tavern was bought by two more Shoreditch brewers, Thomas Marlborough Pryor and Robert Pryor, who sold it to John Tanner in 1819. In 1855 George Tanner his son took over but he died on 10th November 1856 and the Flask was left in the hand of trustees of John Tanner’s will until it was sold in 1917.

Swearing on the Horns

Between the 17th and 19th centuries there was a folk custom in the Public Houses and Inns of Highgate known as the Swearing on the Horns. A burlesque performance in which visitors to the establishments were required to take a oath presided over by a costumed Master (usually the landlord), which culminated with the saluting (kissing) of a set of horns or a pretty woman if one was present. Having taken the oath and paid the required price for the ceremony the visitor was entitled a Freeman of Highgate which came a variety of dubious benefits. Though this type of ceremony died out in the 1800’s, The Flask Tavern and The Wrestlers have revived the tradition.

It is said that the ghost of a Spanish servant or barmaid haunts The Flask Tavern irregularly. She reputedly committed suicide in the pub, possibly by hanging, over the love of a man. An apparition would be considered rare, but cold spots, flickering lights, moving objects and the sensation of someone blowing on your neck are all associated with the haunting.

Visiting The Flask? Check out their details:

Have you had a spooky experience at The Flask? Share your story below! 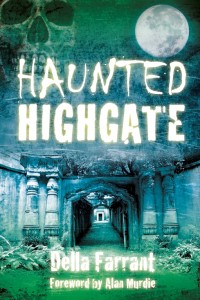